The Governor of American Samoa to the Secretary of the Interior for the fiscal year ended June 30th. 1963 Annual Report,
H. Rex Lee (Dem) 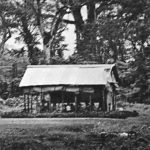 …Construction was under way on American Samoa’s first consolidated elementary school at Nua village, to serve students from seven villages and to replace inadequate scattered schools in each. The school will pave the way for Samoa’s educational TV system.
…A comprehensive library program was in effect…
American Samoa’s educational TV system, planned as the core of a program to lift all levels of education simultaneously throughout the islands moved a step nearer to reality. Land had been cleared atop Mt.Alava for central antennas, plans were completed for studios, technical and instructional staff, and recruitment for key personnel was under way.
Many earlier problems in the recruitment of qualified stateside personnel had been solved. Completion of cooperative arrangements with several school bodies in Hawaii and on the Mainland, intensive recruitment and adoption of favorable salaries and contract provisions helped to provide skilled teachers and training staff for the special difficulties of work in an isolated tropical area such as American Samoa.
[Policies, operations; private schools and philanthropic assistance; administration; community participation; school system: structure all follow] (Lee, 1963: pp. 17 – 25)