October 18, 1966: President Lyndon B. Johnson is the only U.S. President ever to visit American Samoa.  He came to see firsthand what had been accomplished with funding provided by the US, under the leadership of Governor H. Rex Lee.  Following his airport speech (shown below), the President and Mrs. Johnson visited Matafao school where they saw the ETV system in actual classrooms.  This was the most modern school system in the world and the President’s delight and amazement, with what had been accomplished, was quite evident during the tour.

Pictures of the visit furnished by Farida Sweezy

I am very proud that I could be here with you today.

I can assure you that the people of the United States share my pride in what American Samoa has done to prove that destiny is really what we make it.

This island–with a population of only 22,000–has become the symbol of what many large nations may achieve for their people.

It has become a showplace for progress, and a proving ground of methods to improve the lives of our fellow human beings.

And, along the way, American Samoa has taken the term “self-help” out of the bureaucrats’ dictionary and made it a living language for their people.

You have doubled the per-acre yield of your crops.

You have sharply reduced the diseases that once plagued your island. And this month you will begin construction of the American Samoan Tropical Medical Center which will provide the finest hospital care in this part of the world.

You have almost eliminated childhood malnutrition.

You have recognized that education is the tidal force of our century, driving all else ahead of it.

I am told that the pilot program of education which you have started may point the way to learning breakthroughs throughout the Pacific islands and Southeast Asia. Samoan children are learning twice as fast as they once did, and retaining what they learn. Surely from among them, one day, will come scientists and writers to give their talents to Samoa, to America, and to the world.

One requirement for good and universal education is an inexpensive and readily available means of teaching children.

Unhappily, the world has only a fraction of the teachers that it needs. Samoa has met this problem through educational television-which was pioneered here by your outstanding Governor, Rex Lee, and the very able Director of the United States Information Agency, Mr. Leonard Marks.

Before Mr. Marks came out here recently to help inaugurate this educational television system, he came to me at the White House and talked to me about its great benefits at some length. Upon his return, he insisted that he come over, and he spent an entire evening reviewing what your hopes and achievements would be. Everyone now wants to study the job that you have done-UNESCO, the World Bank, New Guinea, New Zealand, India, and other countries around the world.

It is truly a remarkable experiment. This technique–which you are helping now to improve–has the power to spread the light of knowledge like wildfire, to spread it all across the wide areas of our earth.

So I want to commend you on the stride that you have taken. We are most grateful for the voluntary action of the Samoan Legislature in voting to pay Federal income taxes. You are the only American territory voluntarily to take on this responsibility.

Your taxes are growing with your economy. You paid about $200,000 in 1963-and yet you paid over a million dollars in 1965. At this rate, you may eliminate the deficit in the United States budget this year.

An American editor, who used to have nothing to say about what we were doing in Samoa, recently wrote, “Somewhere on earth there may be a more spectacular example of revolutionary change in an area and its people, but in years of roving the world’s far corners, I have not seen it.”

All praise to you for that No, not quite all praise. Some of it must go to a man that you know better than you do any other American–your own very able Governor, Rex Lee.

This year it was my pleasure to give him the President’s Award for Distinguished Federal Civilian Service–an award that is granted to only five individuals each year.

I have no appropriate awards to confer upon the people of Samoa for their progress. But there must be great satisfaction and honor enough in contemplating what you have done in 3 years, where you are today, and where the works of progress will lead your children in generations to come.

I hope that America may soon accomplish in her other Pacific island responsibilities the same achievements of Samoa. Indeed, I think we must.

For no other corner of the world can be left untidy and ignored today. Where once the sailing clippers called rarely in a year, now the jet airliners touch down several times a week. The time is fast coming when there will be no such thing as “a far corner of the earth.”

So I think this is the way that God intended it. I cannot believe He wanted man to be isolated, ever, from his neighbor. He did not seek that distance or race or religion or creed ever separate us from one another. At the table of need, we all find our place, and the greatest need of all today, I think, is for human fellowship and a sense of what each of us can do for the rest of us.

They want to be independent and stand on their self-respect. They want to keep their dignity and to be proud of themselves and their heritage. They insist on equality. They reject being camp followers and stooges for the brokers of international politics.

At home it is pride, and the sense of being your own man. In Asia it is called “face.” It is what makes all of us members of the same race. It is what makes us know that in the emerging Asia–and throughout the entire world–there is really no place for second-class citizens.

But time and change have jostled our prejudice. They have shown us that the center of the world is anywhere that people are. And they have made imperative the spirit of American Samoa today.

For the road to the future runs to Asia, and it crosses here–here at the heart of the Pacific.

I want now to thank you from my heart, for what you are doing here is really a message of hope for millions of peoples elsewhere in the Pacific and in Asia. I shall remember your example vividly–and for that, and ‘for the privilege of coming and visiting with you today, I shall always be thankful to you.

Note: The President spoke at 12 noon at Tafuna International Airport in Pago Pago, American Samoa. In his opening words he referred to H. Rex Lee, Governor of American Samoa, and his wife, Chief Rapi Sotoa, member of the Samoan Senate, Chief Tima Ma’o, member of the Samoan House of Representatives, and Chief T. Le’iato, Secretary of Samoan Affairs. 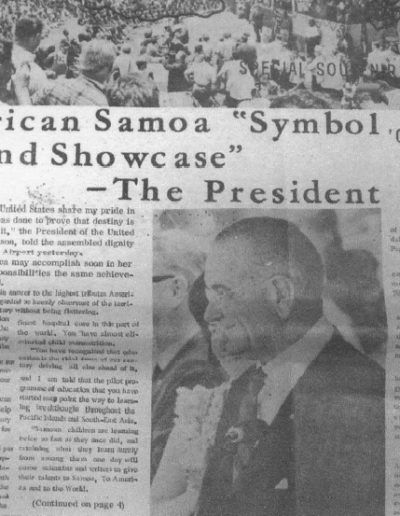 Samoa Times published on the day of Johnson’s visit

Lee and Johnson in motorcade 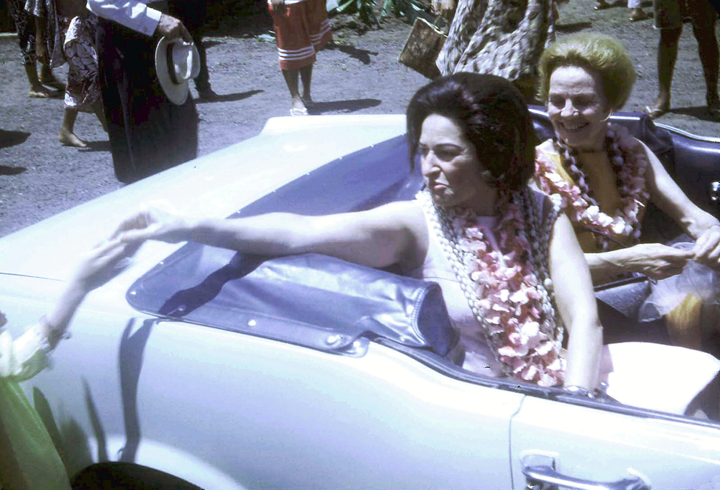 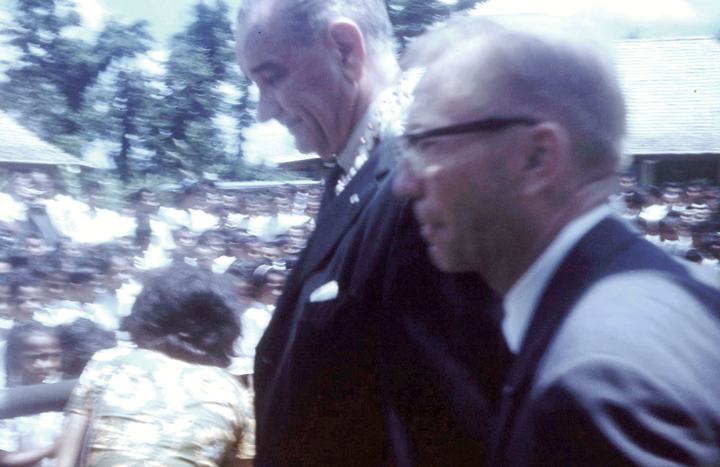 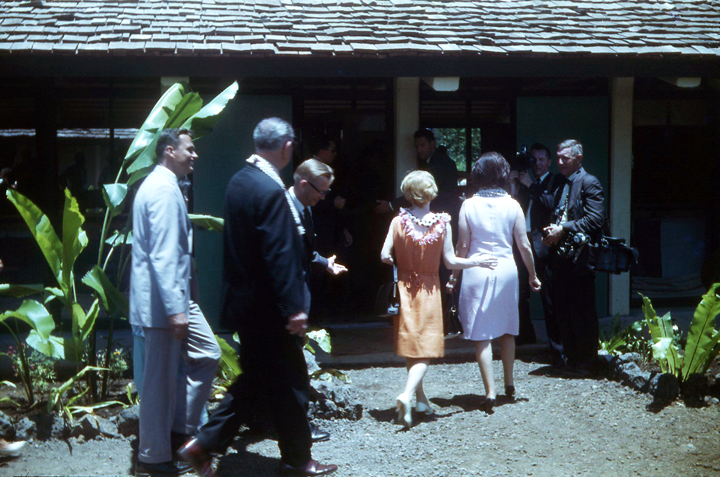